The German Embassy hosts its first Symposium on Science Communication

The Embassy of Germany in India hosted its first symposium on Science Communication on 7th November, 2017 in New Delhi. The theme of the event was Bringing Science to People, which emphasizes the need for increasing efforts to promote and improve science communication in the country.

The conference was an amalgam of two sessions. The first was a keynote lecture by Dr. Carsten Konneker, Editor in Chief of Spektrum der Wissenschaft, which is the German edition of the popular science magazine Scientific American. It was followed by a panel discussion on “Exploring the secrets of successful science communication” where science communication experts from India and Germany shared their experiences and views on recent advances in this field offering some tips to their peers in India.

Jasper Weick, Deputy Chief of Mission of the German Embassy in India highlighted areas in which the two countries share mutual alliances. These include defense, education, combating terrorism, piracy and climate change, and most importantly, Science and Technology. He said that, “in 1950s, Germany assisted India in setting up the Indian Institute of Technology Madras, now Chennai, along with several other universities and institutes that has contributed to the growth of India”. Scientists invest money, labor, and intellect in making new findings, which at times becomes difficult for them to communicate to the society. He added that, “since the last few years, a new field – Science Communication has emerged, which aims to bridge the gap between scientists and the community”. This knowledge will educate public about the work that scientists do. It will also bring society’s problems to the scientists so that they can proactively work to address their concerns.

With this theme in the limelight, Dr. Carsten Konneker delivered a keynote lecture on “Science Communication in the digital age”, where he talked about the latest and popular means of science communication used throughout the world. Science journalists have long been using newspapers, magazines, radio, and to some extent, television for science communication. In recent times, modes like science café, science slam, children’s university, open house, science blogging, podcasts, YouTube channel, and citizen science have gained popularity. All these means of communicating science fall under one umbrella – Digital Science Communication. “Journalists may be loosing grounds in print media but are gaining a lot of momentum in the digital space”, believes Dr. Konneker.

Science café is similar to a regular coffee shop in many ways. People chat, sip coffee and enjoy their evening. In a science café however, there will also be a scientist who will engage the public and try to explain them scientific concepts in an interesting manner. The public can ask questions, share views, and request future meetings. This helps the public to connect to science and to scientists.

A science slam is like science theatre. A scientist performs on stage and explains difficult-to-understand scientific concepts through singing, dancing, enacting, and talking. After the show, the audience can engage with scientists and get to know their creative and funny side. A science slam named Euraxess was announced in India in the month of September this year. It invited scientists, students, and teachers to present a science topic of their interest and showcase their science communication skills. Science slams have a long history. In the early 18th century, scientists used to conduct Electric theatres where they would explain science to the lay audience in an interesting and engaging manner.

A children’s university or open house is a means of encouraging young kids to pursue science. Leading universities invite kids to see their laboratories and interact with faculty. In most cases, this is accompanied by a lecture for children to increase their spirit of inquiry and motivate them to pursue science. Many institutes in India including Translational Health Science and Technology Institute in Haryana, the Indian Institute of Science in Bangalore and Tata Institute of Fundamental Research in Mumbai conduct open houses on a regular basis.

Another upcoming means of science communication is Blogging. Anyone can start writing a blog. It can be on any topic – travel, food, history, language, finance, politics, or science. Most leading science journalists in the world own a science blog. It is free and easy to use. They write articles, share video and audio files on new, interesting, and happening science topics. Some journalists also produce 2-3 minutes long audio clips on science topics, which are known as Podcasts. They are uploaded on the Internet and can be shared via WhatsApp, twitter or Facebook. These help to increase awareness for science in the community. According to Alexander Waschkau, a psychologist and podcaster, “producing podcasts is low cost and easy and can be a great way to engage with public provided that the information is presented in an interesting way with a unique style and format”. He started a podcast and TV show named Hoaxilla with his wife Alexa in Germany. Past episodes include investigations into how the Titanic sank, what are vampires and chemtrails.

Scientists and journalists these days, also record science videos on their smartphones and upload them on YouTube. Derek Muller, an Australian-Canadian science communicator for example, owns a YouTube channel with millions of subscribers. Anyone can upload videos on YouTube. It is free and user-friendly. The Government of India is also planning to set up 24-hour science news YouTube Channel, which will be live soon.

An absolutely novel and one-of-its-kind way of communicating science to public is Citizen Science. In this method, both scientists and people from the community register themselves on a website. Scientists put up projects and the public voluntarily engages in these scientific endeavors. For example, testing the purity of water samples from lakes. The scientist will help the public in collecting samples, comparing and sorting, analyzing them, recording results, presenting data and publishing mini papers. This will educate public at the same time. If people in an area get to know that their lakes are polluted, they will look for solutions to clean them. They can approach scientists to find ways to accomplish this task. There is a citizen science website in India too. It is called – India Biodiversity Portal. “This strategy helps to bridge science, society, and policy”, believes Dr. Anett Ritcher from the German Center for Integrative Biodiversity Research, who leads the Citizen Science strategy 2020 in Germany.

Many means of science communication are available globally but the penetration of science education amongst the public doesn’t meet expectations”, said Dr. Konneker. According to him, training scientists to communicate their findings in an easy layman language should be the first step in this direction. At the same time, journalists must also be trained to understand science and experimental methods. Universities must mandate a course on science writing so that researchers are exposed to communicating science at an early age, he said.

Dr. Ramaseshan Ramachandran, an eminent science journalist formerly with national daily The Hindu agreed with Dr. Konneker on these points. According to him, science journalists act as nodes for connecting scientists with the society. They help public to form informed opinions and arrive at conclusions on science-based issues. Since India is a diverse mix of people from different ethnic groups, societal beliefs, socioeconomic status, and educational background, journalists have an added responsibility of being analytical and critical of their reporting. He asserted that the coverage of science must increase in Indian media, which will help to overcome scientific mistrust among the society. The scientists must contribute to achieving this goal by being more willing to engage with journalists and accepting their deadlines and other constraints of work culture. At the institutional level, he said, there must be a proactive Public Relations team, an incentive for scientists to engage with the society, updated webpages and mandatory contracts for scientists to contribute to programs of public outreach. 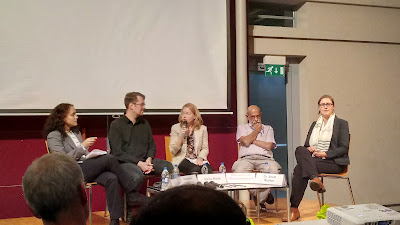 Panel discussion at the Symposium on Science Communication held at the German Embassy, New Delhi.


Posted by Bhavya Khullar at 11:17 No comments:

Zika virus made global headlines when the World Health Organization declared it a public health emergency in February 2016. A disease transmitted by mosquitoes spread across the Pacific area and Americas like wild fire causing abnormalities in fetus and disorders of the nervous system in adults. Sadly, the disease remains poorly understood till date.

Deciphering nitty-gritty of the disease requires experiments in lab animals. But here’s the problem- there are NO animal models. Now, scientists at the Icahn School of Medicine at Mount Sinai, New York in USA have found the first animal model to study Zika virus. It’s a mouse deficient in a functional STAT2 gene hence it is called a stat2 null mouse. These mice are highly susceptible to ZIKA infection and display disease symptoms identical to those of humans. Interestingly, ZIKA virus does not infect normal adult mice. Only the stat2 null mice get infected because they have a compromised immune system. The other organisms that can be used for the same purpose are rhesus macaque (monkeys) and chicken embryos but they are less feasible because specialized animal facilities and training are required to study ZIKA virus infection in monkeys and chicken.

When the stat2null mice were infected with ZIKA virus, they lost weight, moved lesser, had a hunched posture, showed paralysis of their limbs, and died after a week. Virus spread to the brain, spleen, liver, ovaries, and gonads. The scientists published their results ina recent issue of the journal PLoS Pathogens.

Many people first heard of ZIKA only recently, but this virus is known for almost six decades. It was first isolated in 1947 from a rhesus macaque in the Ziika forest in Uganda, Africa. It caused the first large-scale outbreak in the Yap islands (in the Pacific Ocean outside Africa and Asia) in 2007 infecting more than 7000 individuals. By late 2015, it had spread across South and Central America, the Caribbean and the southern parts of the United States. Importantly, during the 2014 outbreak in Brazil, infections during pregnancy were linked to fetal malformations such as spontaneous abortion, stillbirth, an enlarged head with a small brain, miscarriages, now collectively known as congenital Zika virus syndrome.

Scientists took a step further by studying how differently do the two strains of Zika virus- the African and Asian affect stat2 null mice. They found that viruses from African strain were more virulent and caused short episodes of the disease that resulted in death in most cases. Asian viruses on the other hand, had a prolonged period of infection that occasionally caused death.

“We establish stat2 null mice as new model to study ZIKA virus pathogenesis and demonstrate its utility in highlighting differences induced by different strains leading to severity of disease. The stat2 null mice allow Zika virus infection and recapitulate many aspects of human Zika virus infection such as replication in brain and gonads”, says Dr. Shashank Tripathi, Research Assistant Professor at the Icahn School of Medicine at Mount Sinai, New York in USA.